We are interested in the nature of magnetism in correlated materials such as complex oxides and how it relates to emergent phenomena such as high-temperature superconductivity. Our tool of choice for this is resonant inelastic x-ray scattering (RIXS), as illustrated in Fig. 1, in which a x-ray core hole resonance is used to couple x-rays to magnetism in order to measure collective magnetic excitations. 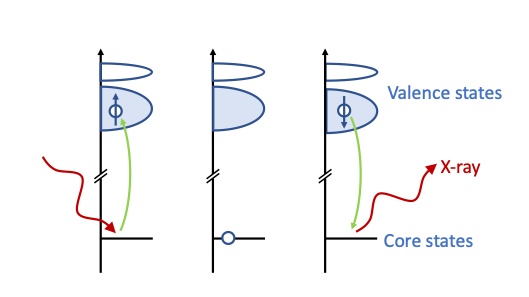 Figure 1: The resonant inelastic x-ray scattering (RIXS) process. The initial, intermediate, and final states are shown from left to right. Photons are represented as wavy red lines and electronic transitions are shown as green arrows. In this process spin excitations are created and their dispersion can be measured by determining the energy and momentum change of the photon.